The difference between a city and a community is the spirit of its people. There is a sweet, sweet spirit in this place we call Madison, our home. It is through the successes, growth, losses and tragedies we are bonded.

THE MAGIC OF MADISON…

Because we are family, when we achieve, we celebrate. When our hearts are broken, we pull together and share each other’s pain. Through these experiences, we have become who we are. We have built this special place. Like no other community, our beacon shines because we are the city that prayer is building, and the strength we have comes through the endless prayers to God from our prayer warriors.

We are a city of faith, and we celebrate in times of need because we believe in the true God that reigns and in all His promises.

Madison is a suburb of Jackson with a population of 27,747. Madison is in Madison County and is one of the best places to live in Mississippi. Living in Madison offers residents a rural feel and most residents own their homes. Many families live in Madison and residents tend to lean conservative. The public schools in Madison are highly rated.

Madison offers its residents a unique suburban hometown. Our city gives priority to safety, comfort and a small-town atmosphere, and is a popular choice for retirees. The city’s retirement program through the Economic Development Department offers retired adults numerous recreational, educational and cultural opportunities and programs. Madison is one of only 14 certified Welcome Home Mississippi cities in Mississippi.

The City of Madison has always put the needs of its citizens first. The city is filled with beautiful neighborhoods. Neighborhood homeowners associations come together in the Madison Organization of Neighborhood Associations (MONA) to share news, ideas and tips on how to better serve their residents and the city.

The History of Madison

Madison, Mississippi, named for James Madison, the fourth president of the United States, grew up along a bustling railroad track in pre-Civil War Mississippi. In 1856 the Illinois Central Railroad opened its Madison Station, the forerunner of today’s City of Madison. Although near-by Madisonville, a settlement established along the stagecoach route of the Natchez Trace, boasted a race track, two banks, a wagon factory and at least one hotel, its residents could not resist the lure of the future. The newly established railroad community began to thrive, and Madisonville soon became extinct.

Like many railroad towns in the South, Madison Station fell victim to the Civil War. Just 10 miles from the state capital of Jackson, it was largely destroyed after the July 18-22, 1861, siege of Jackson. Although no battles were waged on Madison soil, Major General S.D. Lee, who ordered the first shot of the Civil War, concentrated his command in Madison Station during the month of February 1864. General Lee later became the first president of Mississippi A&M, now Mississippi State University. The railroad continued to serve as a magnet for business growth after the Civil War. In 1897, the Madison Land Company encouraged our northern neighbors to “Go South, and grow up with the country.” Located in Chicago on the Illinois Central Railroad line, the Land Company’s interest in development prompted Madison to incorporate as a village, although the charter was later lost when regular elections were not held due to the failure of the “land boom.”

The Land Company offered prime land for as little as $3 an acre. The company boasted that Mississippi had the lowest debt ratio in the nation at $19 per capita and that Mississippians were declared one third healthier by “official figures” than people in New York and Massachusetts. These figures were quoted with confidence in the Madison Land Company brochure by Bishop Hugh Miller Thompson, the Second Episcopal Bishop of the Diocese of Mississippi and a Madison resident, who hailed originally from the Wisconsin heartland. 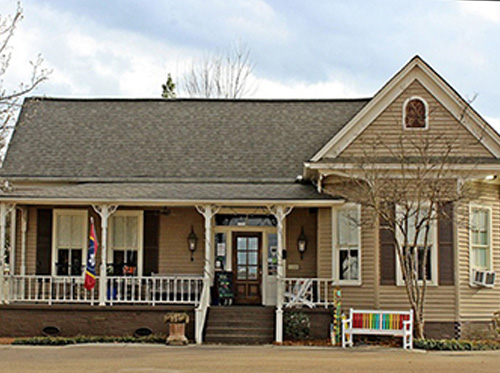 The first of three houses on what was Dorroh Street but now Madison Avenue is included in Dorroh Street District on the National Register of Historic Places. All three represent the best examples of the Queen Ann vernacular style in Madison. James F. Dorroh (1872-1943) lived in this house and was a poet of some renown. His family moved to Madison from Alabama when he was a child. Nicknamed Jim the Poet, he published his first poem at age 27 in the Christian Observer and later released a book of his poetry. He began his career as a rural mail carrier in 1915. 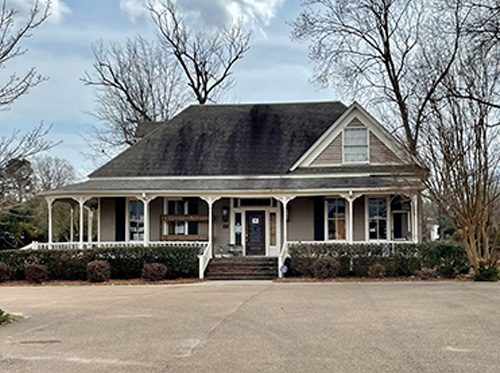 This house is one of three on what is now Madison Avenue, and the group are the best examples of Queen Ann vernacular style in Madison, built c. 1895-1905. In the early 1900s, the houses belonged to a physician, a merchant and a mail carrier, who provided necessary services to local farmers. As built, the three reflect the local prosperity. Dr. William Dorroh lived at 105 Dorroh, and the street was originally named after his family. The three houses make up the Dorroh Street District on the National Register of Historic Places. 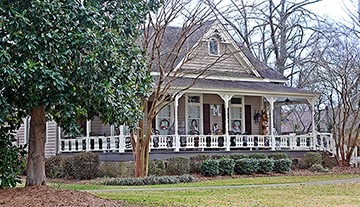 Originally known as The Sanders House, the residence was built on land purchased by Harry Sanders in c. 1905 for $350. He sold the land and house in 1907 for $2,308 to Joseph Harrell, owner/manager of Farr Mercantile, the local general store. In its early years, the house was the only one in town with indoor plumbing. This and the two houses to the east, on what is now Madison Avenue, are fine examples of Queen Ann vernacular style built in Madison. This house is included in the National Register of Historic Places. 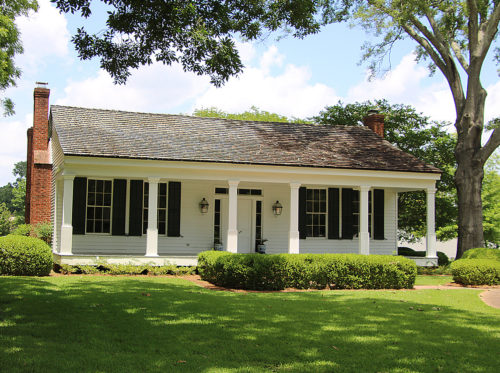 Built by John Curran in 1840, this house is the oldest in Madison, predating the coming of the railroad in 1849 and the founding of the town in 1856. Curran owned the property 1839-1851. The house is an excellent example of the Greek Revival style of architecture as it was applied to modest housing. The Main Street house, also known as the Hoy House after longtime residents Tom and Mamie Hoy, is listed on the National Register of Historic Places. 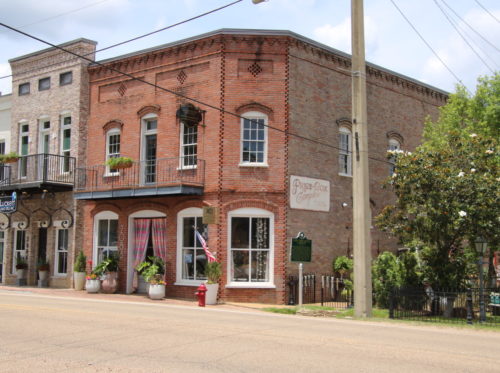 Built in 1890 by the Hesdorfer brothers, this building is the last 19th century commercial structure left in Madison’s original business district. Throughout the 1900s, the mercantile was the center of commercial, social and civic activities in Madison. The building also housed the telephone exchange and municipal meetings, including Thanksgiving potluck community suppers. The general store’s first owner was George Bryan Farr (1872-1914), who lived on Magnolia Street. Farr sold the store to Harrell, who lived on Dorroh Street. The building was known as R. B. Price Mercantile from 1930 to 1975. The site is listed on the National Register of Historic Places. 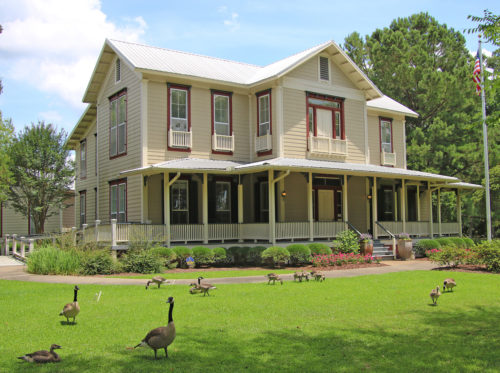 Madison’s Strawberry King lived in this house in the late 1870s-1890s. Dr. H.E. McKay, grew strawberries on 100 acres surrounding the house. He and his brothers, John and W.T., were the first in the area to ship the fruit north by refrigerated train cars. At its heyday, five to 10 rail cars a day were packed with berries that sold for $12 a crate in Chicago. McKay claimed in 25 years of farming to never show a loss in net profit. The Old Canton Road house, the only remaining part of the McKay farm, is listed on the National Register of Historic Places. 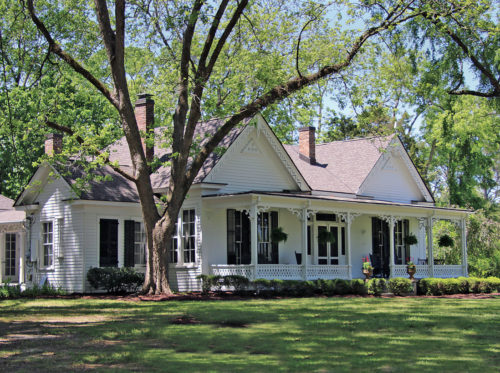 What is known as the Montgomery House began as a pioneer dogtrot dwelling in 1852. As the earliest resident T.N. Jones prospered, an impressive façade was added, doubling the size of the house. No major structural changes have been made to this refined country cottage since 1898. Jones became the first president of the Bank of Madison in 1901. The house was inherited by the Montgomery family in 1920. The house, significant as one of the few remaining local examples of Gothic Revival architecture, is listed on the National Register of Historic Places. 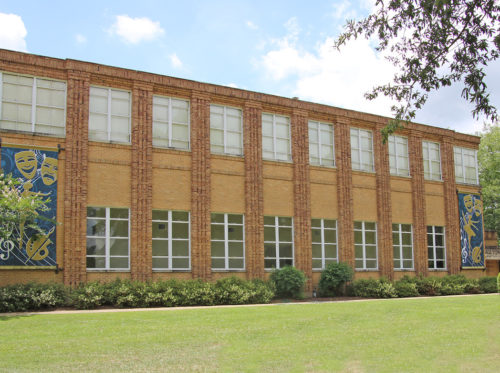 The gymnasium was built in 1936 as a PWA project of the New Deal under President Franklin Roosevelt. It was added to the existing Madison-Ridgeland Public School for grades 1-12. The building is a rare example of the Art Deco style used for educational buildings in Mississippi. Notable architectural features include decorative brick work laid to add visual interest, stylized figure sculptures of griffins and low relief letters spelling the school name. The building is a Mississippi Landmark and listed on the National Register of Historic Places. 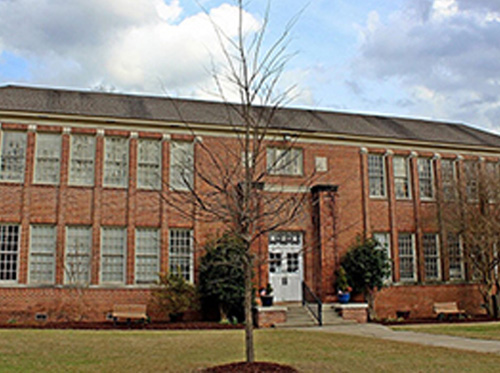 Built in 1910 as a two-story schoolhouse, the Madison-Ridgeland Public School underwent additions in 1922, 1936 and the 1960s. The original school was incorporated to the existing building in the 1922 work. The school is architecturally important as the earliest known use of the Jacobethan Revival style, the 1920 era’s most fashionable school design. The building’s simple and straight-forward Jacobethan look was not considered as high style as other schools built around the same time. The building is designated a Mississippi Landmark and is on the National Register of Historic Places. 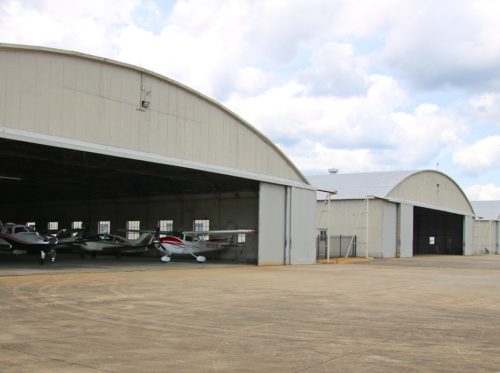 The Madison airport began in 1940 as Robins Field and was renamed Augustine Field in 1941. During World War II, the facility operated as the Mississippi Institute of Aeronautics, a training school for U.S. Army Air Corps cadets. The three hangars survive intact from that era. In 1949-51, the YWCA held community square dances in the hangars and other recreational activities for the townspeople. The airfield was deactivated in 1944 and became Madison’s airport. In 1953, it was renamed Bruce Campbell Field, in memory of the Civil Aviation Authority who helped city leaders with airport issues. The hangars are listed as Mississippi Landmarks and are on the National Register of Historic Places.